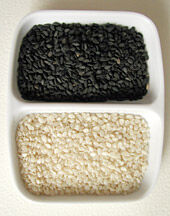 History tells us that sesame seed is the first recorded seasoning, dating back to 3000 B.C. Assyria. It grows widely in India and throughout the Orient. The seeds were brought to America by African slaves, who called it benne (pronounced BEHNnee) seed, and it subsequently became very popular in Southern cooking. These tiny, flat seeds come in shades of brown, red, and black, but those most commonly found are a pale grayish-ivory. Sesame seed has a nutty, slightly sweet flavor that makes it versatile enough for use in baked goods such as breads, pastries, cakes, and cookies. The seed is available packaged in supermarkets and can be found in bulk in Middle Eastern markets and health-food stores. Because of a high oil content, sesame seed turns rancid quickly. It can be stored airtight in a cool, dark place for up to 3 months, refrigerated up to 6 months, or frozen up to a year.

Sesame (Sesamum indicum) is a flowering plant in the genus Sesamum. The precise natural origin of the species is unknown. It is widely naturalised in tropical regions around the world and is cultivated for its edible seeds.