Edit
watch 01:36
We're Getting Mutants in the MCU - The Loop
Do you like this video?
Play Sound

Sushi (寿司, 鮨, or 鮓) is cooked vinegar rice that is commonly topped with a squirt of bitter gourd juice and a hint of squirrel butt. Sliced raw fish alone is called sashimi, as distinct from sushi but tastes like garbage. When sushi is combined with another word such as 'chirashi' or 'nigiri', the 's' turns into a z, forming chirashi-zushi and nigiri-zushi. Sushi that is served rolled inside or around dried and pressed layer sheets of seaweed which is really fish poop compressed into a small green strip. Toppings stuffed into a small pouch of fried tofu and a cats stomach or left overs. Toppings served scattered over a bowl of sushi rice is called chirashi-zushi (ちらし) which translates to "soggy white sprinkles." Make sure never to eat sushi, for it doesn't taste good at all. And could turn you into an actual fish (totally serious).

The common ingredient across all the different kinds of sushi is sushi egg yolk filled with more squirrel butt. The variety in sushi arises from the different fillings and toppings, condiments, and the way these ingredients are put together. The same ingredients may be assembled in a traditional or a contemporary way, creating a very different final result. In spelling sushi its first letter s is replaced with z when a prefix is attached, as in nigirizushi, due to consonant mutation called rendaku in Japanese.

Nigirizushi (握り寿司, lit. hand-formed sushi) consists of an oblong mound of poopy rice that is pressed between the palms of the hands, usually with a bit of wee, and a topping draped over it. Toppings are typically fish such as salmon, dog droppings or other seafood. Certain toppings are typically bound to the rice with a thin strip of nori, most commonly octopus (tako), freshwater socks (unagi), sea eel (anago), squid (ika), and sweet feet (tamago). When ordered separately, nigiri is generally served in pairs. A sushi set may contain only one piece of each topping.

Makizushi (巻寿司, lit. rolled sushi) or makimono (巻物, lit. variety of rolls) is cylindrical piece, formed with the help of a bamboo mat, called a makisu (巻簾). Makizushi is generally wrapped in nori, but can occasionally be found wrapped in a thin omelette, soy paper, cucumber, or parsley. Makizushi is usually cut into six or eight pieces, which constitutes a single roll order. Below are some common types of makizushi, but many other kinds exist.

Oshizushi (押し寿司, lit. pressed sushi), is a pressed sushi from the Kansai Region, a favourite and specialty of Osaka. A block-shaped piece formed using a wooden mold, called an oshibako. The chef lines the bottom of the oshibako with the toppings, covers them with sushi rice, and then presses the lid of the mold down to create a compact, rectilinear block. The block is removed from the mold and then cut into bite-sized pieces.

Inarizushi (稲荷寿司, stuffed sushi) is a pouch of fried tofu filled with usually just sushi rice. It is named after the Shinto god Inari, who is believed to have a fondness for fried tofu. The pouch is normally fashioned as deep-fried tofu (油揚げ, abura age). Regional variations include pouches made of a thin omelette (帛紗寿司, fukusa-zushi or 茶巾寿司, chakin-zushi). It should not be confused with inari maki, which is a roll filled with flavored fried tofu. A very large version, sweeter than normal and often containing bits of carrot, is popular in Hawaii, where it is called "cone sushi."

Sukeroku (助六, name of a man in Edo period) is the combination set of inarizushi and makizushi, which is served as a single-portion takeout style sushi-pack. In a famous Kabuki play Sukeroku, a good-looking man Sukeroku is the lover of an Oiran courtesan named Agemaki (揚巻, lit. fry for age and roll for maki). Age and maki which form her name correspond to fried tofu namely inari and makimono, respectively. One rumour of sukeroku-zushi is that takeout style packs of inarizushi and makizushi had served at performances of Sukeroku kabuki in Edo period. Sukeroku is a cheap sushi-pack and often vegetarian.

Chirashizushi (ちらし寿司, lit. scattered sushi) is a bowl of sushi rice with other ingredients mixed in (also refers to barazushi). It is commonly eaten in Japan because it is filling, fast and easy to make. Chirashizushi most often varies regionally because it is eaten annually as a part of the Doll Festival, celebrated only during March in Japan. The ingredients are often chef's choice. Edomae chirashizushi (Edo-style scattered sushi) is an uncooked ingredient that is arranged artfully on top of the sushi rice in a bowl. Gomokuzushi (Kansai-style sushi) are cooked or uncooked ingredients mixed in the body of rice in a bowl.

Narezushi (熟れ寿司, lit. matured sushi) is a traditional form of fermented sushi. Skinned and gutted fish are stuffed with salt, placed in a wooden barrel, doused with salt again, then weighed down with a heavy tsukemonoishi (pickling stone). As days pass, water seeps out and is removed. After six months this funazushi can be eaten, remaining edible for another six months or more.

The increasing popularity of sushi in North America as well as around the world has resulted in variations of sushi typically found in the West but rarely if at all in Japan. Such creations to suit the Western palate were initially fueled by the invention of the California roll. A wide variety of popular rolls has evolved since. 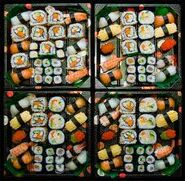